On 8 September Westernport Water’s Dianne MacKenzie was awarded – The Australian Open Spatial Industry Award for Excellence.
Recognition for the way she implemented the developer’s work as executed drawings solution here at Westernport Water.
Dianne’s efforts involved considerable work in – Establishing and applying Westernport Water’s business rules to the software. Liaising with and communicating changes to property developers and draft persons. Stakeholder engagement internal and external, delivering in-house training and implementing the software applications in record time.
The Industry Excellence Award sponsored by Open Spatial Australia, is awarded to an individual or organisation for excellence in the use and development of an Open Spatial Product.
Open Spatial Australia are a leading provider of Geographic Information Systems (GIS).The Australian Open Spatial Committee judged nominees based on their impact – on users, business processes and outcomes within an organisation.
Other criteria focused on the use of innovative skill in the development of services and Geographic Information System (GIS) applications. Including – individual dedication to the development of new technology’s, and applications that enhance GIS functionality in the workplace.
Westernport Water Managing Director Murray Jackson commented ‘this award is recognition of our team’s developments in data management highlighting our commitment and dedication to innovative water supply and management.’
This significant development has delivered many process improvements and savings – Westernport Water went live with its GIS in June 2009. Open Spacial As Constructed Design Certification (ACDC) was implemented shortly after resulting in a reduction in surveying and drafting costs of over $100,000 in the first 12 months.
Property developers have echoed their support for the system and have praised Dianne for the manner in which she has implemented the process.
For more information on our GIS please visitwww.westernportwater.com.au 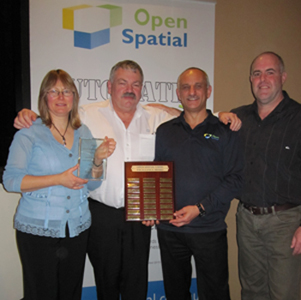