Westernport Water once again comes to the rescue of those affected by natural disaster by donating up to four semi trailer loads of quality hay produced from recycled water, which will be used to support farmers battling after the floods.
The hay made available will make its way to areas of need through the Gippsland and Mornington Peninsular Lions Clubs Need for Feed program, who have been organising the logistics and co-ordinating transport.
Managing Director of Westernport Water Mr Murray Jackson commented “South Gippsland has been fortunate to have experienced good growing conditions this year and we are pleased to be able to assist in the recovery of affected communities”.
“The farmers will need feed supplies for some time, at least until their pastures begin producing again.”
Lions Clubs Need for Feed coordinator Graham Cockerell said “ This generous donation of hay is very much appreciated and will be distributed by Lions Clubs in the flood affected areas.”
The need for feed initiative born in response to the 2006 bush fires has continued to deliver fodder to farmers that need it most, thanks to the passion and teamwork of local Lions club members and various transport companies.
For additional information, visit www.westernportwater.com.au and lionsneedforfeed@yahoo.com.au
Pictured below: Westernport Water Managing Director, Mr Murray Jackson and Gary Abrehart from Abrehart Transport Pakenham. 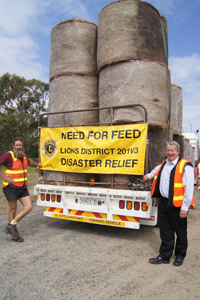 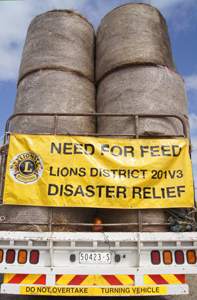