Three of the largest Bass Coast employers teamed up last week to raise awareness about the prevention of men’s violence against women at a White Ribbon event held in Newhaven.

“On average, one woman is killed every week in Australia as a result of domestic violence. This has got to stop.” 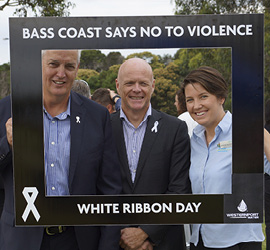 “Post-accreditation, Nature Parks is now endeavouring to “walk the talk” and lead the way in raising awareness, ultimately eradicating men’s violence against women.”

“We understand Council’s influential and powerful role in creating a violence-free community by modelling non-violent, equitable and respectiful gender relations in the workforce”.

White Ribbon Day, which is officially on 25 November is an internationally recognised day of action, and calls upon all Australians to stand up, speak out and act to stop men’s violence against women. It also marks the start of the 16 Days of Activism, a United Nations campaign to end gender-based violence.

National Water Week – Water the Heart of our Culture